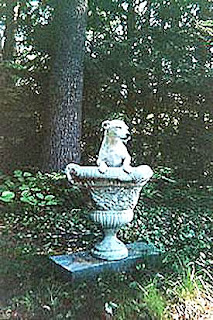 Some years ago, I inherited a Jack Russell terrier, who for some reason promptly choose me as his boon companion in his otherwise circumscribed life . If I went for a walk to the hemlock grove behind my house, he would join me, sometimes tagging at my heels, sometimes ranging out ahead of me in ever widening gyres, and poking his black nose into every hole, log hollow, rock crevice, tree crevice, leaf pile, brush pile, puddle, and pit he could find. In the garden he was also there. If I was in the process of digging a hole to plant a new tree, he would stand beside me, ever at alert, his head cocked, watching my work intently. If I deserted this task and moved over to clip a hedge he would trot behind at my heels. Waiting. And if ever I was on my knees with my hands deep in the good earth ---- about at his level in other words ---- I would hear his snuffling, and glance over. There he’d be, cheek to jowl, eyes fixed on the ground, ears perked forward, ready for some action. In time I taught him to dig out weeds, and even trained him to dig holes for tulip planting.

His other work with us was to protect the property from intruders which, to his dogly mind, were legion. There were known to be bears, wolves, foxes, wild ungulates, and all manner of unidentified species lurking in the forest beyond the garden wall. We ourselves could not always see these beasts, and we often wondered why, on some otherwise quiet afternoon, he would charge out from the porch and race along the top of the stone wall barking furiously, as if holding at bay a primordial herd of invading mammoths or a rangy pack of dire wolves from the time when this little patch of earth was all forest and swamps.

One afternoon, while I was working in the garden, I heard my companion barking furiously in the woods beyond the back wall. Nothing out of the ordinary really, except that he would return periodically to my side, circle my ankles and charge out again into the alien forest to resume his barking, which I noticed had a slightly different, more frenetic (if that’s possible) timbre to it. It occurred to me that he had treed something, and after a while, I went out to see what it was. It turned out he was holding at bay the largest, wildest coyote, I have ever seen.

Most of the coyotes that periodically cross this property are skittish things that tentatively flit over the walls to feed on compost. If they see you, or hear you, or even think they see you, they fade into the forest. But this animal was a fearless Goliath, and he was standing his ground ---- a great gray and brown furred, wolflike thing with a wide head, his forelegs propped on a low rock, staring back at this little canine poseur who circled at safe distance, yapping furiously. I realized, if he so chose, he could step down and with one snap, do away with my loyal companion. So I stepped forward and waved my arms.

Rather than dash away, the coyote merely sauntered off indifferently, took a stand on another boulder and turned to stare. The dog charged after it, circling and barking with even more ferocity, having presumed, I suppose, that he believed he had got the better of this devil dog. I called him off with a whistle and clapped my hands to scare off the intruder and returned to the garden, the dog at my heels.

We saw this coyote on several occasion after this event. We sometimes saw him standing on a wide stone wall that runs along the west side of the property, the morning sun gleaming off his gray -gold fur. Another time we saw him saunter across the yard, glancing over at the house periodically, straight–legged, and spoiling for a fight. He became a commonality. He even earned a name: el Lobo. We actually came to appreciate him for his wildness.

It was about this same time that I learned that his wolflike appearance was no accident. New genetic studies on the origins of the Eastern coyote seemed to indicate that, genetically, they were far closer to the original New England wolf, a sub-species of the red wolf, than they were to the simpering, little coyotes of the West. He and his like had returned to their native forest habitat along with the bears, fishers, bobcats, white-tailed deer, other denizens of the primordial forest that grew back in New England after the region lost most of its farmlands.

Twice over the following year, the Jack Russell stood el Lobo off again. Once at the stone wall next to the garden, and once when, for no apparent reason, he appeared in the middle of the vegetable garden among the tomatoes plants and the chard, glaring back at the house. On both these occasions, alerted by the barking of my assistant, I was the one who ultimately drove him away.

Later that winter, however, there was a third stand off.

We had a big, disorganized group of people at Christmas Eve dinner that year. Late in the evening, one of the guests went out on the porch and found the Jack Russell by the back door, his head hanging low, in apparent defeat. He walked in, slowly, an almost unheard of gait for him, and we noticed that he had a bloodied shoulder and that his unbounded, unstoppable energy seemed to have drained out of him. I gathered him up and found deep bite wounds all around his shoulders. Within a half an hour we had him bundled and raced him off to a nearby animal emergency center which, having determined that he had been badly mauled, sent us off to the Tufts Animal Hospital [rose, do you know the proper name for this place??] in Westborough.

This begat an ironic night drive through darkened landscape of rural New England, when all the world was stuffed and sleeping off the full dinners of Christmas Eve. The dog was admitted and the vet, a refined gentleman from one of the southern states said he was not sure the dog would survive the night, but that they would do what they could.

We drove home and waited for the dreaded call. When it came, around seven, we were informed that he was still alive.

He lived through the second night. The entire staff, having heard his story began rooting for him. He rallied, lived through the third night, and was released a week later, much battered, barely able to walk, but still counting himself among the living.

At his exit interview from the hospital, the vet explained that he had been picked up and shaken by a large animal, probably a coyote, but that he must have put up a very good fight.

“I imagine,” he said in his lazy drawl, “ that he must have got in a few good bites.”

Maybe he did. After that night, the woods were still. The great horned owls began calling in the hemlock grove in late January. In February the snows began melting back slowly, and by March, the wood frogs began calling from the nearby vernal pool.

But, after that terrible Christmas Eve, we never did see el Lobo again.
Posted by John Hanson Mitchell at 12:59 PM No comments:

“… you are astonished that I don’t feel willing to leave a country so miserable as ours; but I cannot help it. I am as much a production of this island as its green oats, and its rose-laurels; I must have my atmosphere impregnated with the perfume of the sea, and the exhalations of its mountains. I must have my torrents to cross, my rocks to climb, and my forests to explore; I want space—I want liberty…”


“Whatever shall we do in that remote spot? Well, we shall write our memoirs. Work is the scythe of time.”
Napoleon Bonaparte
Posted by John Hanson Mitchell at 12:00 PM No comments: